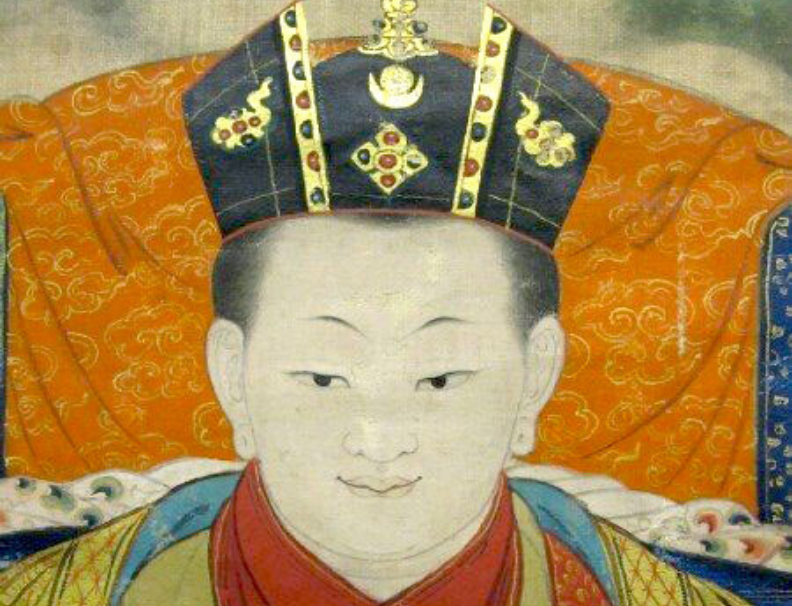 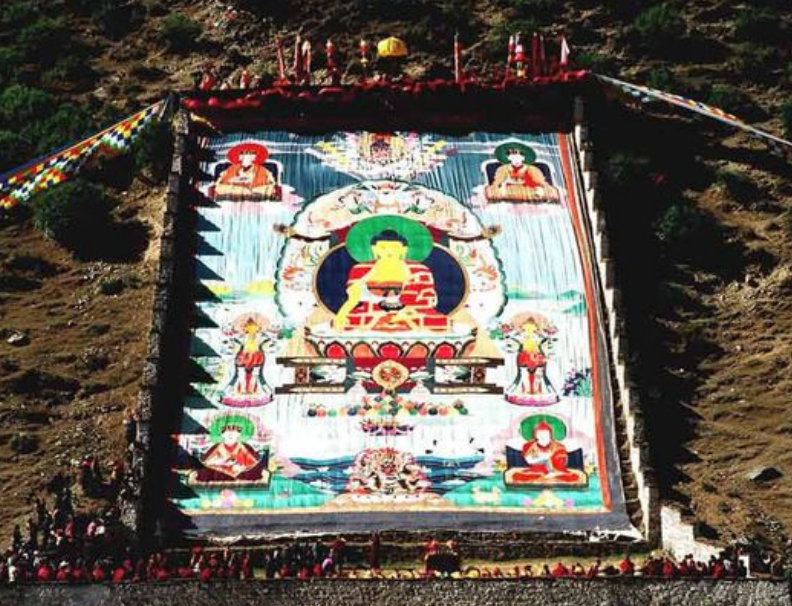 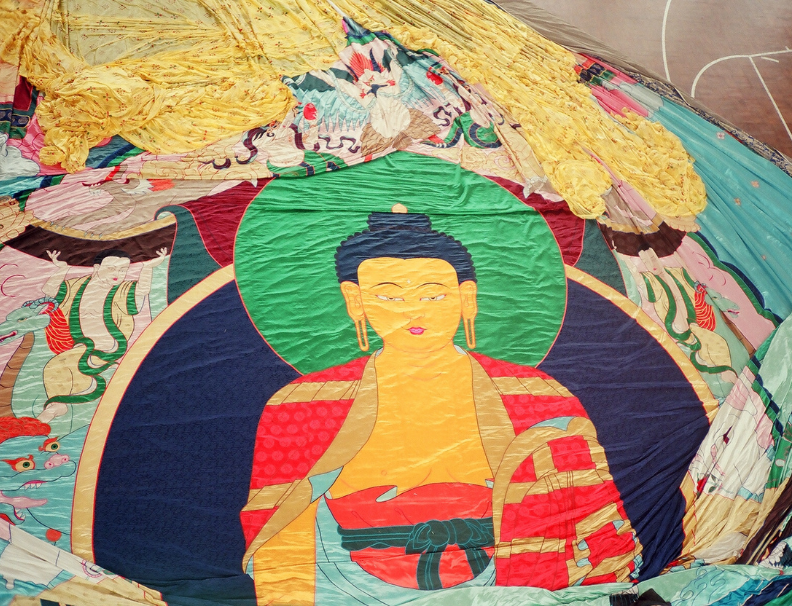 Tsurphu monastery dates to the year of 1187 when the first Karmapa – Dusum Kyenpa identified the auspicious location for his dwelling. It is with this Karmapa that the tradition of reincarnating lamas was introduced in Tibet throughout the various schools of Tibetan Buddhism. Significantly, the present constructive energy at Tsurphu has arisen with the arrival of the reincarnate 17th Karmapa- Urgyen Drodul Tinley Dorje- who was enthroned at Tsurphu September 1992.

Tsurphu was completely destroyed during the Cultural Revolution in the mid-1960’s,.The Ven. Drupon Dechen Rimpoche was given the challenging responsibility of rebuilding the monastery by the His Holiness the 16th Karmapa, Rigpe Dorje while living in exile in India.

Many great monasteries in Tibet once possessed giant silk appliqué thangka for public display and worship. These often huge banners known in Tibet as gos sku chen mo (brocade image), or thongdrol (liberation by sight), comprise some of Tibet’s greatest art treasures because of their spiritual significance, size, and intricate design. Some survived the cultural revolution, most did not. The giant silk applique thangkas of Tsurphu monastery in central Tibet, traditional seat of the Karmapas, were both destroyed during this time.

Between 1992-1994, the making of a 23 x 35 ( 108′ x 76″ ) meter giant silk appliqué thangka of Sakyamuni was undertaken to fuse Tibetan and Western expertise. The first ceremonial display of this image, May 22nd, 1994, marked the revival of an age-old tradition that had not been observed at Tsurphu for 40 year Terris and Leslie were asked to design these new thangkas for the Kagyu Lineage.

Tsurphu monastery is situated in a valley two hours northwest of The landscape here, at over 4600m, is mainly sloping mountainsides brightly speckled with wildflowers in the warm season, white peaks ahead and a rushing river below. On the south bank of the river, in front of the new monastery, are the old steeply inclined steps upon which the gigantic appliqué Thangka is displayed for a few hours once each year.

The creation of these huge thangkas is traditional throughout Tibet. The tradition of giant applique thangkas is a Karma Kagyu innovation initiated by the 4th Karmapa in the 14th century.

These thangkas are referred to as goku (gos.sKu) (pronounced Kye-gu) in Tibetan, literally means “Brocade-image or body”. Another name for them is “thongdrol”, which means liberation by sight. Thongdrol is the event when a viewer sees a sacred image created using correct measurements (sacred  geometry) has the “seed of enlightenment” dwell in his/her heart.

Eventually (after many lifetimes) the viewer will become a Buddha him or her self. These hangings are, in fact, constructed using a range of heavy brocades, silks, and satins sewn together in the appliqué or “patchwork”. The intricate line work is translated using a technique similar to that found in Tibetan tent design, typical of this culturally nomadic people. The Karmapas, in particular, were renowned for their elaborate tent settlements. They traveled throughout Tibet in giant tented encampments bring the Buddhist teachings to the most remote regions. Styles in art and iconography differ according to the various religious schools. The Karma Kagyu style of painting, known as Karma Gadri, was established in 1500, reflects influence from India (in its form), China (in its coloring) and Tibet (in its composition).

These aspects were very much considered when constructing the new gos.sKu for Tsurphu monastery. This was completed in the spring of 1994,  to replace the previous 16th-century appliqué made during the time of the 9th Karmapa, Wangchuk Dorje.

The artist responsible for this ancient thangka which was known as the “Ornament of the World” (Dzam-ling mdzes-rgyan), was the famous Karma sGar-bris sculpturer, Karma-srid bral, alias “the madman of Sgo”, but other theories say it may have been  Karma Tashi the originator of the Karma Gardri School, both were considered emanations of Mykyo Dorje, the 8th Gyalwa Karmapa. It was completed in 1590.

His Holiness the 17th Karmapa has named the new Thangka as the Karma Gadri Thangka in honor of the unique Karmapa lineage painting style. Tsurphu monastery is situated in a valley two hours northwest of Lhasa. The landscape here, at over 4600m, is mainly sloping mountainsides brightly speckled with wildflowers in the warm season –white peaks ahead and a rushing river below. On the south bank of the river, in front of the new monastery, are the old steeply inclined steps upon which the gigantic appliqué Thangka is displayed for a few hours once each year.

The month of final assembling work began outside, in the factory courtyard; but as the image quickly grew larger, a gymnasium in Lhasa became the workspace. This allowed half of the thangka to be unrolled and working on at a time, as it was to large otherwise. Before the finished image was delivered to the monastery, certain preparations were made for it to be faithfully consecrated. The sacred syllables “OM”, “AH”, “HUNG” were cut out in fabric and sewn behind each figure, traditionally placed at their body, speech and mind centres.  A fragment of the 400-year old previous Tsurphu gos.sKu, the Buddha’s head, was found saved by a devotee, and placed behind the Buddha’s heart as a relic. The finished work was brought to Tsurphu and was consecrated by H.H. Karmapa, as it was displayed the first time in 1994.

All these aspects were very much considered when constructing the new gos.sKu for Tsurphu monastery. This Thangka, completed in the spring of 1994, was made to replace the previous 16th-century appliqué.

In the early morning, the huge thangka is carried from inside the main temple, where it is kept, through the monastery courtyard, across the river, and up the facing hill to the top of the steep inclined wall on which it is unfurled. This physically demanding preliminary requires the effort of at least 70 monks. The image is then unrolled and once its protective veil is raised, it is visible for 3-4 hours this once during the year. During this time formal ritual offerings are performed and prayers are recited by monks below. This is followed by streams of pilgrims of all generations, presenting themselves before the giant thangka to make their devotional offerings (through the giving of silken scarves and making prostrations) whilst receiving its great blessing. From his balcony at the temple, the Karmapa witnessed the ceremony and the crowded scenes below. Before the image is carefully rolled up and carried away for another year, the lines of pilgrims move away from it, across the landscape, towards the temple courtyard, where they waited to pay their respects and make offerings to H.H. Karmapa and receive his blessings.

The ceremonial hanging of the Tsurphu gos.sKu takes place each year on the 12th day of the Tibetan 4th lunar month. This date is the important religious event of “Saga Dawa” which marks the Buddha’s birth, enlightenment and passing into Nirvana. Also included in this festival is Guru Rinpoche’s bringing of Buddhism from India to Tibet, the 10th lunar day of each month is sacred to him.