Terris (USA) and Leslie (UK) have collaborated on creating Tibetan art for 28 years.

Both trained in this art form have completed two monumental silk appliques for H.H. Karmapa's Tsurphu Monastery, Tibet (1992-97)replacing lost heritage art destroyed during the Cultural Revolution.  As well as 2 large ceremonial companion pieces of the giant appliques. The first was completed in 2007, the last being sewn in India 2017

  Terris Temple-first westerner to be trained in Tibetan thangka painting (1966-75) is a disciple of HH the 16th and 17th Karmapa. His enthusiasm for practicing and preserving this traditional art led him to teach at Naropa Institute (1974) and at Buddhist centers worldwide. His contemporary works- bird, flower, and landscapes on silks with mineral pigments- are derived from creating thangkas.

Leslie Nguyen Temple's foundation in Psychology and Art therapy led to her interest and study of Tibetan thangka painting with Terris Temple (1990-1992). Her textile art - based on techniques found in eastern Tibet- blends silk, brocade with painting techniques to create unique appliqué images.  She continues to create traditional silk thangkas alongside a range of her contemporary themes which range from environmental to abstracts.

Presently, Terris is focused on the making of a feature documentary "Thongdrol" about Tibetan Art with HH the Karmapa, and  Director David Cherniack,

The second film is of archival footage from our 1992-2018 Tibet projects.

This film "Tsurphu, the Giant Appliques" documents the making of the four great appliques.

The artists met in Thailand in 1990. They set up their studio there for the next two years where Terris taught 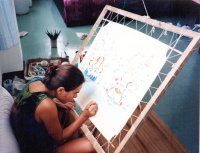 Leslie Buddhist iconography and Tibetan Karma Gadri style thangka painting. After this time, they decided to create the first project together- a painted life-size Buddha image to offer to His Majesty King Bhumibol of Thailand- a gesture of gratitude to the people of Thailand and their generous hospitality. The image was presented to His Majesty's office in 1992 a week before the artists headed for Tibet where they were then shortly after auspiciously offered the opportunity to create the giant appliques for Tsurphu Monastery.