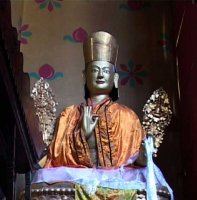 Our many years working for Tsurphu Monastery, the crown jewel was our time together with Rinpoche. We first met Rinpoche on the day of His Holiness the Karmapa's enthronement at Tsurphu, September 27th, 1992. Auspiciously, we sat at Rinpoche's feet during the entire ceremony. Immediately after receiving the blessing from the His Holiness the artists were lead into Drupon Rinpoche's 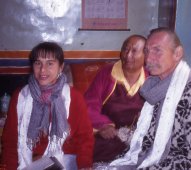 humble quarters, a place during the next 6 years they would spend much more time with him.

During this initial visit, Rinpoche did a mo (divination) which would change their lives forever. The outcome of this mo turned out that Leslie and Terris would be the artists responsible for making the four giant Tsurphu appliques, and returning them to Tsurphu under Rinpoche's plan of fully restoring Tsurphu to its former grandeur.

The below bio of Rinpoche found at the Rumtek site

In Tibet, a boy was born in Nangchen bMed Zhung, a place of scenic beauty in the popular race of Gonmar, to a father named A-ten Gyatso and a mother named Wangchuk Drolma in the fifteenth Rabjung Cycle, on the thirtieth (new moon) day of November in 1919.

In accordance with the young boy's wishes, he became a monk at the age of 8 when he entered the Ta-na Monastery of Nangchen. Dilyak Monastery's Choeje Dabsang Rinpoche performed his Hair-Cutting Ceremony and named him Gyaltsen Metok. From then on, he studied under Dabsang Rinpoche's guidance and received all the empowerments to ripen one's mind and the oral instructions to enlighten the mind. He completed his religious studies.

At the age of 17 in the Wood Pig Year in 1935, he went on a pilgrimage to the holy places of Tsa Ri Tag-tsha, Drakar Monastery, and Drakar Lhachen in Kongpo, Tibet, and further received oral instruction from Dilyak Choje and others. Listening to these teachings, he meditated in remote places.

At the age of 23, in 1940, he went on a pilgrimage to a holy place known as Rong-tSen Khawa Karpo, where the lamas, tutelary deities, and dakinis gather like clouds and pleased them with offering prostrations and circumambulations. He also offered the gifts of dharma to the people there and satisfied all he met. He then returned to his place of birth.

Under the direction of Lama sMen-La at Ta-na Monastery, he studied chanting, liturgical music, the making of lines and sand mandalas, and other monastic arts. At the age of 26, in 1944, he went on a pilgrimage to rTsa Ri Rong Kong, and along the way charitably gave deep and vast dharma teachings and offered worldly wealth to people according to their needs, satisfying them and caring for them with compassion, which was happily returned to him.

Unfortunately, his parents died within days of each other. He offered all his family's wealth to the monasteries of all sects, and to holy beings. Realizing the ultimate nature of the samsaric world and making a firm pledge in his mind not to go astray from Dharma, he received more empowerments and oral instruction from Lama sMen-La and Lama Karma Gyatso.

He decided to go to the west of Lhasa, to Tsurphu Monastery, the main seat of the glorious Karmapas. In 1946, at the age of 27, 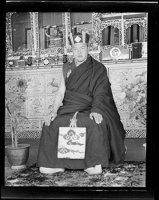 he met His Holiness the Sixteenth Gyalwa Karmapa and received the full empowerments of Vajrayogini, Chakrasamvara, and Avalokiteshvara. After that, he took the Eleventh Jamgon Kunkhyen Tai Situ Rinpoche, Pema Wangchuk Gyalpo, as his teacher, and as his disciple received the novice and full ordination of a monk. Subsequently, he entered into Yiwong Samten Ling Retreat Centre at Tsurphu for three years and three months, where he attained very high realization.

After the completion of his retreat, through the pure wisdom of His Holiness the Sixteenth Gyalwa Karmapa, Situ Pema Wangchuk, and Jamgon Khyentse Woser, Drupon Dechen Rinpoche was appointed the Retreat Master (Drupon) of Tsurphu, where he would benefit the Dharma and all sentient beings. As part of his responsibilities, he offered empowerments and oral instructions to the retreat lamas. He placed emphasis on meditation practice. 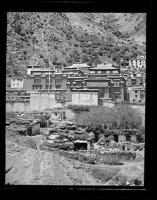 In 1953 at the age of 35, he visited Kagyu monasteries as a representative of the Sixteenth Gyalwa Karmapa, carrying a letter of proclamation from him stating that "Kyabje Drupon Dechen Rinpoche is my alter ego." During his tour, he gave dharma advice to the public about the importance of observing the fruit of karma and was well-received by all who enjoyed and appreciated his simple nature and profound knowledge. He returned to Tsurphu Monastery safely and in good health, and gave all the offerings he received during his tour to the Tsurphu Labrang, the administrative body of the Karmapa.

In 1954 at the age of 36, he was sent to Maha Tsunai in China and met with Chairman Mao Tse-tung. In 1955, he returned to Tsurphu and made extraordinary offerings to the Sixteenth Gyalwa Karmapa, who was astonished and said laughingly, "Why are such precious, priceless gifts in the hands of a poor lama?"

In 1956, the high lamas and tulkus presided over by Kyabje Drupon Rinpoche performed a long puja to pacify the obstacles to Dharma during the Communist invasion of Tibet; but these were in vain. His Holiness the Gyalwa Karmapa left for the south of Tibet and India on pilgrimage and asked Kyabje Drupon Rinpoche to remain in Tibet for some time as a protector of the monastery and the people there. His Holiness told him to leave Tibet when the time comes, and he would have no harm on the way.

In 1959, fulfilling the prophecy of His Holiness the Sixteenth Gyalwa Karmapa, Drupon Rinpoche left Tibet on the pretext of the 'Managing Committee' of Tsurphu, traveling through Nepal. He reached Sikkim and met His Holiness Karmapa at the old Rumtek Monastery. The Karmapa was very pleased to see him arrive safely. After a few days he called Drupon Dechen and sent him to Ladakh saying, "If you go there, you will benefit the Dharma in general and the Kagyupa order of Buddhism in particular." So Kyabje Rinpoche, with all his retinue, left for Ladakh and established the new Mahay Monastery with all its religious images and scriptures in 1966.

In 1972, at the age of 54, he built Tashi Choeling Nunnery and Karma Tashi Rabten Ling Monastery. These, along with Mahay Monastery, were run under Drupon Rinpoche's auspices and he imparted full religious studies to the students there.

During that time, His Holiness the Sixteenth Gyalwa Karmapa sent a letter to Rinpoche thanking him for all his dharma activities and assigned Kyabje Rinpoche the task of returning to Tibet to renovate Tsurphu Monastery.

Tsurphu, which dated back to the time of the First Karmapa Dusum Khyenpa in the eleventh century, had been completely destroyed during the Cultural Revolution. By the 1970s, it was crumbled to dust and in ruins.] Rinpoche replied, "Now I am an old monk. I am not sure if I can renovate it, but as an order of Buddha Karmapa, I can go." At that moment, the Karmapa mentioned that nothing will happen there and, "you can go earlier and I will come later." This was subsequently mentioned by Kyabje Drupon Dechen Rinpoche as a prophecy of the reappearance of the new Seventeenth Karmapa incarnation in Tibet.

In 1981, after fully handing over Mahay Monastery to Khentin Tai Situ Rinpoche, Kyabje Rinpoche left with his retinue for Tibet to begin rebuilding Tsurphu. In 1984, he had rebuilt Tsurphu's main temple. Still, Kyabje Drupon Dechen Rinpoche withheld his tears and reconciled himself with the impermanent nature of the world, and said he must do whatever possible to completely rebuild Tsurphu and fulfill the wishes of the Sixteenth Gyalwa Karmapa.

After that, he went to Nangchu Kha in the north of Tibet to collect offerings from his previous devotees. He again gave the nectar of Dharma and planted the seed of Buddhahood in the minds of the people he met. In 1987, he visited India and acquired many images and scriptures to be installed in the newly built Tsurphu Monastery. He revived the tradition of performing annual Vajrakilaya and protector Mahakala pujas and the performance of chams (ritual lama dances) of Vajrakilaya and Mahakala, respectively.

He renovated the Yiwong Samten Ling Retreat Centre, recruited thirteen new retreat lamas, started meditation practices after a gap of thirty years, and paid the food expenses of all the retreat lamas. After they completed the retreat, the lamas were sent to various monasteries in response to the wishes of his devotees. These lamas have flourished since then, and people from all walks of life, irrespective of sect, flock to Tsurphu like bees to a flower, a sign that the extraordinary practice of Mahamudra is spreading to the present day.

Kyabje Rinpoche is a great man who took a lion's share of the responsibility in Tibet to send a search party to find the genuine reincarnation of His Holiness the Sixteenth Gyalwa Karmapa, according to his last testament. He played an enormous role in the enthronement of His Holiness the Seventeenth Gyalwa Karmapa Ogyen Trinley Dorje, and in the personal supervision of his studies, which left an immeasurable impact. He also helped greatly in finding the reincarnations of the Third Jamgon Kongtrul Rinpoche and the previous Pawo Rinpoche, thus helping His Holiness Karmapa and his heart sons meet together.

Drupon Dechen Rinpoche created a renaissance at Tsurphu, like the great Lama Gongpa Rabsel, who revived Buddhism from the downfall in Tibet following its persecution by King Lang Dharma in the eighth century.

Even when Drupon Dechen Rinpoche was suffering from a long-term illness, he took a special interest in Dharma and did not stop working for the benefit of Dharma and all sentient beings. In the presence of His Holiness the Seventeenth Gyalwa Karmapa Ogyen Trinley Dorje in Tibet on May 9, 1998, he passed away and remained in meditation without any bodily change for one week. This aroused unwavering faith in the minds of all of his devotees who were present. They praised him as a highly realized man, and it consolidated their faith in Dharma.

Briefly and roughly translated and edited in January and February 2005 from the Life Story of Kyabje Drupon Dechen Rinpoche written by his disciple and the Karmapa's tutor in Tibet, Karma Losang Yeshi Chokyi Nyima.