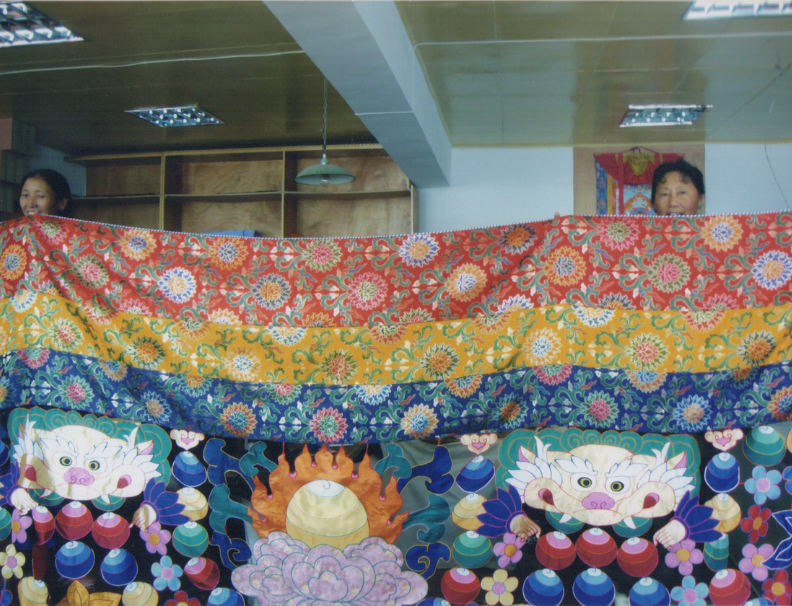 The artists Terris and Leslie Nguyen Temple were requested by His Hoilness the 17th Karmapa and the late Drupon Dechen Rinpoche to undertake the making of two large ceremonial silk appliqué banners ( drawa drabje) for display in the main assembly hall at Tsurphu. These are the companion pieces of the two Giant  silk appliqué thangkas completed before 1997, and are to be used in the main assembly hall for the ceremonial aspect of the both festivals.

Unlike the 2 giant thangkas these two Drawa Drabje appliqués were not destroyed, but taken to Sikkim by the 16th Karmapa Rigpe Dorje in 1959, and are now at Rumtek Monastery, India. These are to be copied for Tsurphu at the request of His Holiness Karmapa, Ven. Drupon Dechen Rinpoche (the late the abbot of Tsurphu), and Tsurphu Gompa.

These two hangings called dra. wa. dap. che, (pronounced drawa Drabje) one is peaceful (Tsechur Drabje)  and one is wrathful (Norbu Drabje), each measuring 2 mts x 40 mt, (approximately 7’ x 120’) will be used during Saga Dawa and Lotsar festivals annually. This will complete Tsurphu’s precious appliqué relics lost during the Cultural Revolution. As with the past projects, the responsibilities of the artists range from drawing the images, acquiring the materials, supervising the sewing work in Lhasa, as well as fund raising. The same team of Tibetan women part of the White Conch Factory in Lhasa, and the artists are the work force.

Tsurphu Gompa is the original seat of all the Gyalwa Karmapas and the Karma Kagyu Lineage. They need this support and these pieces to continue their important work for the benefit of all beings.

The Lotsar celebrations are where the second Drabje (Norbu) is used to purify the coming new year. Mahakala puja is performed, as well as the protector’s cham (lama dances). Again approximately 80 beautifully costumed dancers perform this ritual cleaning ceremony. Dignitaries, nomads, local villagers and foreign guests attend both of these festivals.

The Norbu Drabje sewing begun in Lhasa,  June 2006, and was completed July 2007 and used since then at Tsurphu.